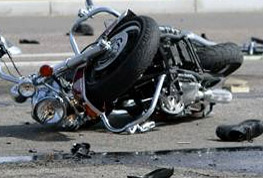 Riding motorcycles in North Texas is a popular activity and total motorcycle registrations increased significantly between 2000 and 2005. Motorcycles are considered by many to be synonymous with danger and serious injury. This is because motorcycles are less visible and less stable than cars and during crashes, most of the safeguards provided by cars, such as seat belts and airbags, are not present on motorcycles. Consequently, motorcycle crashes are much more likely to produce serious injury or death. Common injuries sustained during a motorcycle crash can include brain damage, which is caused by the head making violent contact with another object or vehicle. Other common injuries include damaged joints, broken bones, soft tissue damage and even “biker’s arm,” which is a condition that can damage the nerves of the upper arm and cause permanent paralysis. If you have been injured in a motorcycle accident, an experienced personal injury attorney can explain your legal options. Please call our motorcycle accident lawyers for a free consultation at 214.880.9988 (Dallas) or 210-550-1123 (San Antonio).